As you may remember, in The $2\, 016$ ICPC Nha Trang Regional Contest, the problem Reservoir, we have built a reservoir near the Red River. The reservoir can be viewed as a rectangular box with unit-length width. Its length can be divided into $n$ sections of unit-length, the $i$-th section having height of $h_ i$ units. We assume that the left and right of the reservoir has height of $0$, i.e. $h_0 = h_{n+1} = 0$.

An example of the cross section of the reservoir along its length and height dimensions is shown in the following illustration:

In the above picture:

What is the maximum number of units of water the reservoir can hold?

Print a single integer — the maximum amount of water the reservoir can hold.

Explanation of the first sample 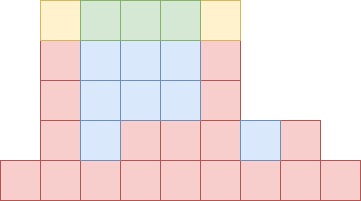